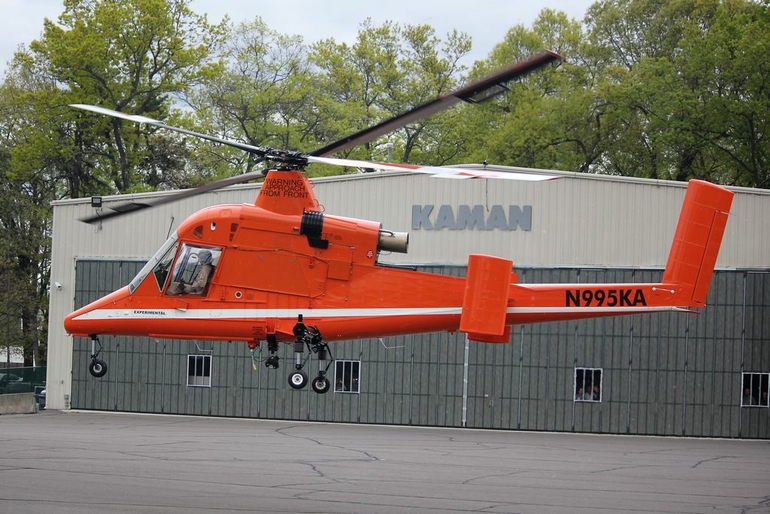 Kaman aims to have the first pilot-optional helicopter certified by the FAA.  It expects to have such a version of its K-Max heavy-lift helicopter available for commercial use by 2020. The aircraft, with its unique intermeshing twin roots, was first certified in 1994 for manned operations, but two were used in a demonstration project by the U.S Marine Corps in Afghanistan in 2011 to test unmanned capabilities in combat zone cargo deliveries. “It started out as a limited objective experiment and was supposed to fly for 30 days, “said Romin Dasmalchi, the company’s senior director of business development. “It was such a resounding success that three years later they decided to redeploy back to the U.S. after the work was done in Afghanistan.

It has an operational readiness better than 95 percent, hauling more than 4-5 million pounds of cargo to remote outposts- essentially 900 ground vehicle loads.  Upon the helicopters’ return to the U.S, they were put into preservation by the USMC. Kaman is again working with the Marines on the latest version of unmanned technology for battlefield logistics and will soon return the pair to flight status.

Dasmalchi said the idea for the future K-Max will be to create a pilot-optional modification that will allow the user to decide whether the mission calls for a manned pilot or unmanned configuration. “The unmanned system that we’re building, you could think of it as a modular kit,” he explained. “If you have an existing K-Max, you could purchase the unmanned kit and it could be installed for you, then you could operate both manned and unmanned,” the option would also be available factory-installed for new aircraft.

Flight testing for the unmanned equipment will begin by the end of the year. It is controlled by a laptop, not by joystick where somebody physically manipulates the aircraft,” he said. While it expects to receive FAA certification for the system next year, what exactly that will entail has yet to be determined. “The existing unmanned K-Max, the ones that the Marines used, were on an experimental certification,” Dasmalchi said. “We don’t know yet what requirements the FAA will do for the unmanned. We know the FAA is making a push to certify this class of UAS.”

Though the manufacturer shuttered its production line for the turbine-powered K-Max in the early 2000s, Kaman restarted in 2015, an after a 17-yar hiatus began new deliveries of the $7.25 million aircraft. It has since delivered 10, bringing the worldwide fleet of the specialized helicopter to 31.

Back To News
Menu